PHILADELPHIA — Markelle Fultz, the Philadelphia 76ers‘ rookie guard, returned to action Monday night for the first time since Oct. 23 in a 123-104 win over the Denver Nuggets.

The No. 1 overall pick in the 2017 NBA draft played 15 minutes as the backup point guard to starter Ben Simmons. He scored 10 points on 5-for-13 shooting from the field, while recording eight assists and grabbing four rebounds. Fultz joined former Washington Bullet Kevin Porter (1980) as the only players in the shot-clock era to record 10 points and 8 assists in under 15 minutes, according to Elias Sports Bureau research.

Fultz checked into the game with less than three minutes remaining in the first quarter to a rousing standing ovation from a sold-out crowd at the Wells Fargo Center. Fans roared in anticipation each time he collected the ball on the ensuing possessions in the period.

“There was a little bit of excitement,” Fultz said about entering the game for the first time. “And a little bit of ‘I have to help the team. I don’t want to let the team down.’ Once I stepped out there on the floor, it felt great to be back out there with my brothers.”

In his inaugural game of 2018, Fultz enjoyed some impressive flourishes and suffered some rough moments. He lost the ball on his first possession down the floor guiding the Sixers’ offense, but followed moments later with a smooth finger-roll layup off the dribble along the right baseline for an easy score at the rim.

Fultz was twice blocked by Nuggets big man Mason Plumlee in the first half as he attempted a couple of midrange jumpers off the dribble, but also orchestrated a choreographed pick-and-roll with Sixers center Joel Embiid, delivering a behind-the-back pass off the action, resulting in free throws for Embiid.

“He gives us another great pace,” Embiid said. “He can find ways to score and also set guys up. You could tell by his eight assists tonight in 14 minutes. That’s big time. That’s what we need him to do — score the ball, get guys involved, and create.”

Fultz appeared more confident during his six-minute stretch in the second half. He unleashed an acrobatic, torquing driving layup off the glass propelled by the right shoulder he’d injured. Moments later, he snatched a feed from teammate Marco Belinelli while diving to the hoop for another basket at the rim.

“I got even more comfortable,” Fultz said of his second-half performance. “The first time, I was just trying to make sure I did what I could do. The second time, I started to get my groove back more and more.”

The Sixers outscored the Nuggets during both of Fultz’s shifts, and he finished his 14 minutes with a plus-16 in the box score.

With the Sixers leading by 20 and just over three minutes remaining in the game, a chant of “We Want Fultz” grew to a deafening pitch. Coach Brett Brown obliged by reinserting the rookie, who took the floor for the final 2:42 to a loud staccato “Fultz. Fultz. Fultz.”

“I thought they were saying ‘Nick Foles,”’ Fultz said of the Super Bowl MVP for the champion Philadelphia Eagles. “Then I realized it, and it was pretty dope. These fans are great, and I love them.”

Fultz avenged Plumlee’s first-half blocks by draining a step-back jumper over the big man in the closing moments of the 76ers’ win.

“Honestly, there were really no expectations,” Embiid said. “My message to him was always about being patient and come back whenever you feel like it. It’s not even about being healthy, but just about being confident and it’s kind of a risk coming back especially when the team is playing well and we have to include him. I thought he did a good job tonight at not forcing anything, set everybody and we played team basketball.”

There had been a degree of intrigue surrounding Fultz’s timetable for recovery, with indefinite information on his return emanating from both the 76ers organization and Fultz’s camp. The shoulder is a notoriously complicated joint, and identifying the specific cause of Fultz’s setback was an elusive exercise. While recovering from a right shoulder problem, Fultz was diagnosed with a scapular imbalance.

“We don’t know where it started, when it started, but it was sometime from the time we saw him in summer league — where everyone saw that he did not have a shoulder problem and there was no indication there was a problem with his shot — to something that very quickly rose to awareness in late September and early October as we started the season,” Sixers president of basketball operations Bryan Colangelo said prior to Monday’s game. “It literally was just a breakdown of muscle function. I don’t know enough about the injury. It’s very uncommon in basketball. It’s very complicated and complex. That’s why there’s been so much unknown here.

Following the game, Fultz was reticent to address specifics about the cause or nature of the injury. He repeatedly deflected questions, opting for silence on occasions when asked if there was a reason he didn’t want to discuss the injury.

Fultz’s recovery took longer than the Sixers initially expected last fall. As recently as February, Fultz was unable to shoot from beyond 15 feet with sound mechanics or a well-tuned rhythm. But in recent weeks, Fultz intensified his workouts. Sources within the 76ers organization believed it was increasingly probable that Fultz might be activated as the team moved closer to clinching a playoff berth, which it did on Sunday.

Brown said before the game that Fultz will serve in a backup point guard role to Simmons for the foreseeable future, picking up approximately 14 minutes per game — his output on Monday — though there’s no medical limit on his playing time. Colangelo added that the team would likely seek out additional “garbage time” opportunities. Both Brown and Colangelo were noncommittal on whether Fultz would play a significant role in the playoffs, where the Sixers will compete for the first time since 2012.

In his pregame news conference, Colangelo emphasized that he didn’t anticipate integrating Fultz into the rotation would pose any more disruption to the chemistry of the team — which has won 18 of its past 23 games — than the recent acquisitions of veterans Belinelli and Ersan Ilyasova. Colangelo said he expects Fultz to help the 76ers with shot creations in possessions, an area in which they’ve struggled at times this season. 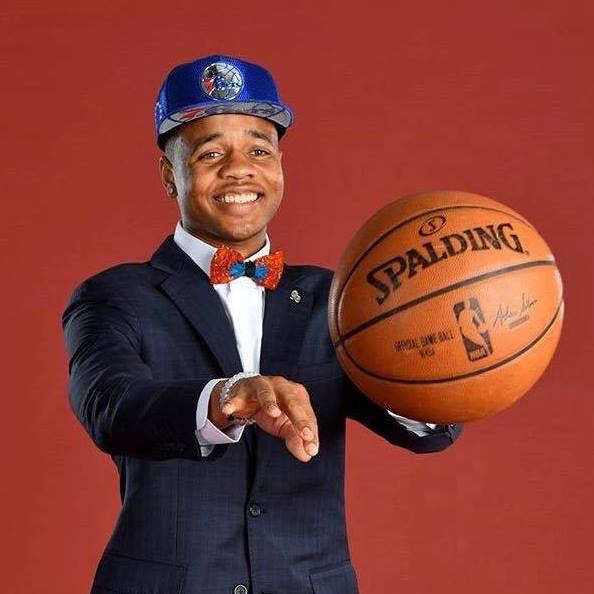 A week prior to last June’s draft, the 76ers traded the No. 3 pick, along with an additional draft pick from either the Sacramento Kings or Los Angeles Lakers, to the Boston Celtics in exchange for the No. 1 pick, with which they selected Fultz out of the University of Washington. In NBA summer league last July, Fultz showed flashes of the dynamic combo guard that enticed the Sixers into trading up, but in 76 minutes of regular-season action in October, he shot only 9-for-27 from the field with a shooting stroke that appeared as unfamiliar as it did awkward.

“Just look at what he’s been through,” Brown said. “It’s ridiculous what he’s been through. He understands it. I understand it. That’s the scrutiny you get when somebody says, ‘And with the first pick in the 2017 NBA draft, the Philadelphia 76ers select Markelle Fultz.’ That comes with pressures and responsibilities and acknowledgements. It’s just such an atypical way anybody enters pro sports. Knowing what I know and seeing what I’ve seen, and understanding how special that kid is from a human being standpoint, it’s a good day.”

Information from The Associated Press was used in this report.